Winning the Future? Here is my entry into the "Gas Pump Activism" contest unofficially started by P. Henry Saddleburr at Disrupt the Narrative

I don't know that P. Henry intended a contest, but it's a great idea, and I'm jumping in with both feet.

Do you have to take these gas prices in silence? I don’t think so.

All you have to do is download this pdf, print out a few copies and put them, along with a roll of Scotch tape, into your car.

The next time you fill up, instead of watching in horror as the dollar amount on the pump races by as the gallons trickle into your tank, affix one of these to the pump.

Take care to not cover vital information regarding safety, etc. and don’t cover any advertising.

Then drive off with a smile on your face, knowing that when the next person drives up to the pump they’ll either agree with you and be pleased to know that they’re not alone, be better informed by your message or if it’s an Obamabot, you’ll have thrown water on their circuitry and ruined their day. 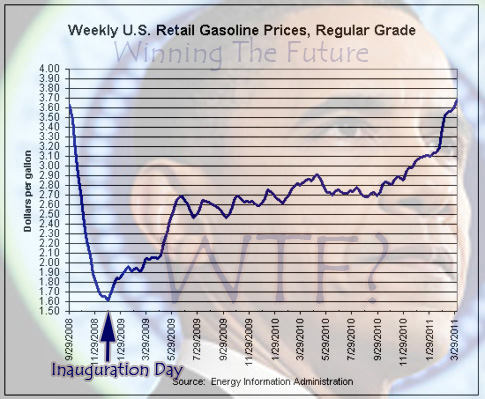 Update: Per P. Henry Saddleburr's suggestion, I have changed the image to denote the date of inauguration of our first Marxist President.  Thanks PHS!

Update 2:  Mailing labels (1" x 25/8" self-adhesive labels) are quite nice.  I was worried about the adhesive being too strong, but Maco item ML-3000 removes fairly easily from smooth surfaces.  Here's a tag for any number of situations: 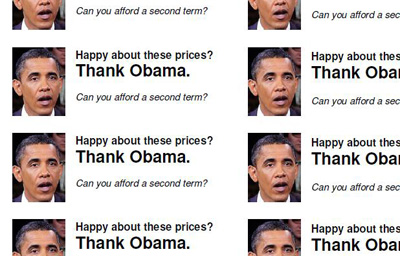 2 The only thing I'd add is to point out Inauguration Day.  Maybe it's not necessary and I'm just over thinking it.

3 Oh, this is very cool!! I wish I knew how to do things like this. You need to go by Soylent Green and Lemur King's Folly and plug it. They do great work, too

I made some stickers, and have begun tagging petrol stations... what fun!

Apparently his Exalted Majesty the Marxist-in-Chief doesn't believe pump prices will be a factor in his re-election... I'd like to prove that fuckchop wrong.  From the AP today...

"I don't think when somebody sticks the credit card in the pump or pays a cashier the cash for a tank of gas that they're thinking about an election in 2012," he said.

I like the idea of stickers far more. They are harder to remove

6 Stickers...awesome...isn't that glue made from EvilOil®?
Makes the heart sing.

7 I think you will be hard-pressed to demonstrate that the president has much control over gas prices. http://imgur.com/tQQgn For example, if I take the same data you used and look at the previous eight years, it looks just as bad (or worse) under the previous administration. I don't bring this up to blame Bush, just to demonstrate that the president has no immediate control over this. Long term energy policy? Sure, that can help. But when anyone tries to invest in things like that you guys lose your shit.

8 I'm thrilled you took enough interest to post such tripe here, Michael.  Your assertion the President has little control over fuel prices glosses over the situation in 2008 when Evil Boooosh relaxed the executive order prohibiting drilling off the coasts.  Remember that?  Remember the way the mere hint at permitting oil drilling dropped the barrel price like a fucking rock, despite the fact the lib congress was decidedly against following through?  Good times.

It seems quite dishonest to make no mention of the fact the EPA has locked up previously leased lands, and stifled drilling in the gulf.  Who controls the EPA?  Martians?  Bears fans?  Crazy Aunt Margaret?  How about the Teleprompter of President Barack Hussein Obama the damned Marxist?

Sure, that doesn't fit the lib narrative, but it's true anyway.

9 Dude!! You were linked at The Examiner!!

10 Linked at bsfootprint.com. I love the stickers idea!

11 Here's my lame attempt at some Gas Pump Activism protest stickers. Leave a comment and let me know what you think!

It is a good article, and the information is very useful,I like it very much,thanks for sharing!And also welcome to our website, http://www.jerseyshome.me/, we offer many kinds of jerseys, and NIKE NFL jerseys are available now .More than 10 items ,we offer free shipping and we also give you a 10% discount when the quantity over 100 and when you pay by western union, we will also give you a 10 discount . We promise to provide our clients with better products and substantial price. Please feel free to place order.