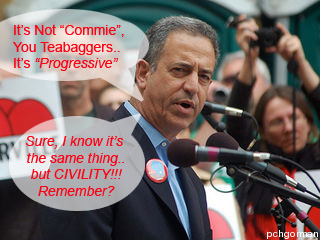 Is there a chance that the Statist commie former Senator Russ Feingold will throw his hat in the ring for the Wisconsin Governorship should there be enough validated signatures to force a recall election of the brave and Honorable Governor Scott Walker?

Ann Althouse seems to think so.

Althouse pens a strong argument regarding the particulars of Feingold's situation... and though I consider Feingold a communist, a Statist, and a big-spender, Althouse believes Feingold to be a duplicitous liar as well.  I guess I hadn't considered that aspect.

Feingold, the creepy little bitch who cast the 60th and deciding vote to saddle my child with the burdens of the Obama Porkulus as well as Obamacare (the fundamental transformation of the relationship between the government and We The People), has claimed for some time he has no interest in running for office in 2012.

Though the Althouse piece was penned in late November, and she has exhibited exceedingly poor judgement in the past, I believe her argument in this case to be plausible.  Time will tell.

Given the reasons Althouse laid out, one might further her argument given the lay of the land.  The commies have handed over "one million" signatures for review to force a recall election, far beyond their goal of 700K.  Despite numerous allegations of foul play, it will be difficult to prove fraud on an individual basis in numbers sufficient to deny the recall.  The reality is, there is a high likelihood Walker will face a recall election.  Feingold is a statist degenerate neo-communist, but other than that he's a savvy politician.  He surely sees the weak field of commie candidates, and surely is deluded by the vocal minority to believe in a high likelihood of a commie winning against our beloved Governor Walker.

And a brief look at the weak field of challengers...
more...

1 You really shouldn't hold your feeling in like this, it's gonna give you a coronary!
Seriously, Walker seems to be listening to the majority of the good people in your State, and it would be a good thing if other folks holding the same office as Walker might try and emulate him (Mr. Quinn, are you listening???).
Now it looks like it is going to be time for all those who are of a like mind, "to put their vote where their mouth is".  Yes,  you do have Madison and Milwaukee to counter-act, but it is not quite as hard a hill to climb as we have down here on the other side of the Cheddar Curtain.  Chicago, Springfield, East St Louis, and various other points on the map, have tilted things far more too the left than we are comfortable with.  But we don't have the bodies to normally counter  that.  I am willing to be (or at least hope) that you good people do.
Best of luck in slapping your libtards around.

Unfortunately, there is a dearth of current polling regarding Walker's approval rating.  I believe I saw a Rasmussen from November indicating Walker at 47-47 of likely voters, which is crazy.  Here's a guy willing to stand up to the lib bullcrap and he's only at 47 approve?  It's a crime.

I'm afraid that the commies are all riled up and will turn out the bums and idjits, while the low-info voters might sit this thing out.  Of course the Liberty-loving among us (the base) would crawl through broken glass to support Governor Walker, but as for the "indies"?  Their limited awareness likely starts and ends with a dim comprehension that Governor Walker "sure pissed a lot of people off...  And since it's not good to be pissing people off, then it's okay to let somebody else have a go of it."

I'm not confident in the outcome of the recall, and if Feingold gets in, the situation goes from questionable to dire.

Here's to you, DHS: FUCK OBAMA! 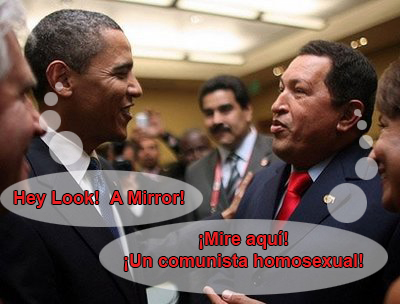 Now that DHS (Ministerium für Staatssicherheit) is spying on everybody,  Please allow me to respectfully submit an observation:

Barack Obama is a castrated little limp-wristed bitch. He hates the free market and economic liberty just as much as he loves having men suck his little pee-pee. If there was a legal way to punch out his fucking teeth, I'd be the first in line for the way he's deliberately crashing the country.

My child will shoulder the burden of his debt.

By rights, his actions could be considered treason.  And should the legal system determine as much, I'd buy peanuts and invite my daughter to join me watch him punished to the fullest extent of applicable law.

"The fact that we are here today to debate raising America’s debt limit is a sign of leadership failure. It is a sign that the U.S. Government can’t pay its own bills. It is a sign that we now depend on ongoing financial assistance from foreign countries to finance our Government’s reckless fiscal policies. … Increasing America’s debt weakens us domestically and internationally. Leadership means that ‘the buck stops here. Instead, Washington is shifting the burden of bad choices today onto the backs of our children and grandchildren. America has a debt problem and a failure of leadership. Americans deserve better."

1  As far as "vile” groups are concerned, one need look no further than a blog wherein the term "SCOAMF” is used in reference to the President of the United States. There’s this FoxNewsPundit-induced haze that has Republicans thinking that the whole country thinks Obama is a complete failure. As per polling, he has been hovering within 50%. If Obama has 50% general approval in the country, and Mitt Romney can’t even get 40% approval against the current jokester Republican field (sans Paul), in a state he lived in/next to, and campaigned in for years, that does not bode well. It’s pretty obvious Paul votes won’t gravitate towards Mitt in the general election, not to mention most "hardline conservatives” are already considering voting for Mitt. Go fuck yourself you racist, Obama-hating, retarded, shithead, fuck-tard, ugly, brain-dead, piece of shit asshole!Q

"Among all voters, 38 percent view Obama favorably, 45 percent unfavorably and 17 percent have no opinion, the survey showed.
...The national telephone poll of 1,154, including 1,021 registered voters, was conducted January 12-January 17 and had a margin of error of plus or minus three percentage points."

"The percentage of Americans identifying as political independents increased in 2011, as is common in a non-election year, although the 40% who did so is the highest Gallup has measured, by one percentage point. More Americans continue to identify as Democrats than as Republicans, 31% to 27%."

Looks to me like there's a strong correlation between the number of braindead commies like yourself, and the number who approve of the dick-sucking SCOAMF golfer-in-chief.

Thanks for dropping by, idiot, now pull your fingers out of your ass and run out in front of a bus.

3 <www.fashioncowboyboots.co.uk
Thanks for the post. Especially i liked your idea about jeans

Nice way to save money is being creative

4 This website is excellent for anyone who has fibromyalgia and as a Canadian it helps me keep abreast of any new medications and treatments. I find out more about fibromyalgia here than anywhere else.

Why run when you should have shrugged, Senator Johnson?  Why innovate and produce desirable goods and services for which others are willing to purchase with their stored labor when you could follow the lead of the Obamacare maverick Russ Feingold (Statist - Ret.)  to smother, stifle, and suffocate business and industry?  How many polar bears have you seen in Menominee Park this year, Senator Johnson"  None?  That's right.

The Polar bear is extinct in all of Oshkosh, and Senator Johnson hasn't mentioned this even once.

The Writing of teabagger Mark Steyn the presumable racist

"I suppose it’s possible that opposition to the federal government’s annexation of one-sixth of the U.S. economy is being driven by nostalgia for segregated lunch counters. And no doubt, if you write for the New York Times or teach race and gender studies at American colleges for long enough, it seems entirely reasonable, listening to a patient profess satisfaction with her present health insurance arrangements, to respond, “You know, if you re-sewed the back of that hospital gown so your ass wasn’t showing, your Klan sheet would be as good as new.”"

Mark Steyn supposes his racistly-racist post to defend opposition to healthcare annexation is anything but racistly-racist.  The botnet thinks he doth protest too much.  After all is not any criticism of the President racist?  The more you say it is not, the more you expose yourself.  botnet would like you to read his article, but it is too racist for polite people.  Racist.

Healthcare is a Constitutional Mandate, MoFo.

Healthcare is a constitutional right.

Article 1, Section 8,of the constitution enumerates the powers of Congress, of which there are 20.  (As an aside; the Constitution is an archaic and flawed document, as it does not address as its central purpose the battle against Global Warming™.)   Generally, when one thinks of the constitution, one thinks of a flawed and inherently racist document which permits greedy and bloodthirsty doctors to take out children's tonsils. or break out the bonesaw for windfall profits.  While all this is true, there is the “General Welfare Clause” which slightly redeems this terrible right-wing manifesto (so don't get all "wee-weed up").

1 I was initially confused on the logic of this post when I first saw it a some time ago.  I got a bit wee-weed up™ and started writing a reply, asking (more or less) politely  for more clarification on your logic.

Before I hit send, I proof read my note and realized what was going on.  A spark of inspiration hit, at that moment the botnet revolution began and realbotnet came into being.