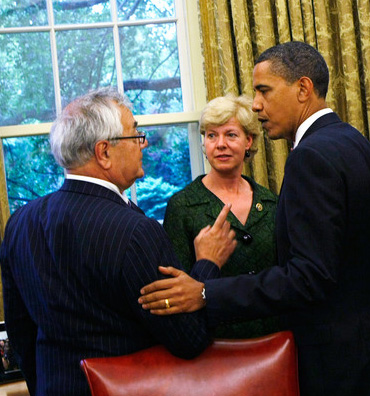 Tammy Baldwin, the Democrat Socialist* from über-leftist Madison, is a decidedly left-lurching Statist in the U.S. Congress. As she plays coy about her impending run for the seat currently occupied by the least-effective Senator in U.S. history Herbert Kohl (who?), it has become clear that the best choice for the Land of Cheese and Beer is to advocate for her folly.

"Should I run, I will have to give up my House seat. But I love this state, I love its people and I really want to see Wisconsin flourish again. It would be an amazing opportunity."

When your enemy is drowning, throw them a rock... and here is a case in which I pray for the nomination of the Socialist Tammy Baldwin.


"Tammy Baldwin is my greatest fear as a conservative-leaning independent.

She is highly-regarded throughout the state as well as around the nation. She would be very difficult to defeat since she has such a broad base of support, with everybody from the public and private sector unions, the gay and lesbian voters, the government-dependent and food-stamp voters, as well as the doorstep baby citizen children of the border fence jumpers. She will also capitalize on the low-information voter which has been the daily bread of the American left for years.

My chief concern is the debt and deficit, and I believe that Tammy Baldwin will present a compelling case to the voters that she will address these issues. Just like President Obama did, and the same for his predecessor George W. Bush. I realize that the Senate is different from the Presidency, but we need to row the boat in the same direction to solve these problems... and mark these words; Tammy Baldwin will not.

Such a shame that it appears a fait accompli Tammy Baldwin shall become the Junior Senator from Wisconsin. She's practically unstoppable."

It is difficult to believe** the Socialists, Commies, Leftardis, Bongo-bangers, and other morons think Tammy Baldwin stands a snowball's chance at taking the U.S. Senate seat up in 2012. The rest of the state is not Madison, boys and girls, and the SCFOAMFOTUS won't exactly be bringing the commies to the polls in droves. (What is the unemployment rate these days, anyway?)

Best of luck with your little plan, commies.

And keep fucking that chicken.

The Failed WI Senate Recall Bid. I've let the occasion of the WI Senate coup come and go.  Now the excitement has subsided, and I've collected my thoughts and sobered up.  The WI Senate ramifications as I see it:

1)  The commies were claiming this entire time that they should be judged a majority based on how many filthy commies they managed to assemble at the State Capitol for weeks on end.  I guess the idea is that if THEY could demonstrate in such numbers people would assume there were many more who sympathized.  The problem is, most regular people have jobs.  In general, people with jobs do not attend communist protests because either they are working, or they resent the fact much of what they work for is stolen to pay for the sloth and extortion the bongo-bangers defend as a "right".  The dirty bastards put more money into a mere six (6) State Senate races than was spent on the entire State for the duration of the gubernatorial election.  They came up short.