Mad Skills Found this at Ace's

Quote of the Day: "We should run Dick Cheney and emphasize he's had a change of heart"
-George at H&B Chat

Original Meaning or Underlying Principles Here is your required reading for the week.  Don't worry, it's only twenty pages.


Does this defense of a fearless originalism by which the whole
Constitution is enforced including the original meaning of abstract
clauses like the Ninth Amendment lead to the sort of horrible results
that, in part, leads Justice Scalia to be faint of heart? I think not. In my
view, the original meaning of the entire Constitution, as amended, is far
more felicitous than he apparently believes it to be. But this is partly
because I do not think the original meaning of the more general clauses
is as limited he does. In other words, an appropriate use of original
meaning originalism leads to far fewer objectionable results than he
thinks it will.

John Hawkins with your Must Read for the AGES. I stumbled on a column written by John Hawkins at Right Wing News which I believe neatly crystallizes leftist political thinking.  Here's the opener:
Liberals love to think of themselves as intellectual and nuanced, but liberalism is incredibly simplistic. It’s nothing more than "childlike emotionalism applied to adult issues.” Very seldom does any issue that doesn’t involve pandering to their supporters boil down at its core level to more than feeling "nice” or "mean” to liberals. This makes liberals ill equipped to deal with complex issues.

Please read the whole thing... it is true and rare.

I Am Andrew Breitbart.

Don't Get Mad... Get MOTIVATED. First:   After about a month of neglecting a bunch of other obligations, we have achieved a goal.

The Verify The Recall Database is live.

I've had difficulty getting on, either through legitimate traffic or DDoS, but that won't last forever.  Then the commie hunt begins.  I hope a bunch of corrupt bastards end up suffering the consequence of their fraud.

I'm happy to have seen the effort through, and I'm proud of the effort of the volunteers.  I spent nearly every night since the petition release entering data... I could have done more.

Second:  "We have danced and danced with Wisconsin politicians.  We don't like to dance and we are now done dancing in Wisconsin.  Forever." - an Unnamed Mining Company Representative.

I'd like to stipulate that Senator Tim Carpenter is a weak-kneed, limp-wristed, commie bitch.

The contemptible piece of shit Dale Schultz (RINO-Richland Center) sided with the commies to shoot down the State Senate mining bill compromise.  The bill was not to approve the proposed iron mine (in the State's most economically depressed area), but to allow a process in which there was a tangible endpoint.  The mine proposal would still have had to wade through the alphabet soup of departments, bureaus, and agencies in order to obtain a permit, but the mother fucking commies (including Dale Schultz) pretended all the while that everybody would glow in the dark and have three-eyed babies if a mine were allowed to APPLY to operate.  Who cares there are mines operating in harmonic compliance with EPA regs less than a quarter tank of gas away... And who cares that the average family income in the area of the proposed mine is $23,000 per year.

The State Senator currently holding office in the district in which I live is a commie.  You may remember Jessica King from her love-fest with the "Fuck The Troops" blogger Ian Murphy.  Senator King the commie won our district Senate seat in a recall against Randy Hopper by a margin of about 1,200 votes (around 1% IIRC) in a district that trends 56% conservative.  In my eyes, she was the deciding vote against the mining permit application process streamlining... and therefore it was her vote which prevented a $1.5 billion dollar job-creating endeavor in an economically-depressed area.  She and she alone is responsible for strangling these jobs before they could ever leave the crib. 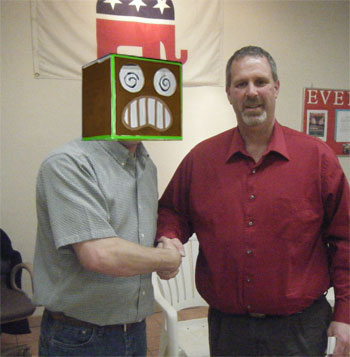 The good news:  She Has A Challenger.  Meet Rick Gudex.  His website currently stinks, but that can be fixed.  What the guy DOES have on his side is organization, drive, goals, an articulate message, and a weak, gaffe-prone communist opponent who barely managed to win office despite a highly-motivated base against a flawed incumbent.  I'm going balls-deep on the Gudex campaign, and I believe that with hard work he will win.

Jessica King:  Hope you've had fun.  Get the fuck out.

Have you seen Kathleen Falks ad paid for by the Teachers Union, staring teachers who are LYING!!!!!

2 Hey Liz.
Sorry, but I don't believe I have.  If it's as bad as the United Wisconsin ad claiming "45 kids forced to sit on the floor because they don't have furniture", then I don't want to see it... I'll end up throwing a brick through the teevee.  I've been trying to steer clear of the evening news... I get too pissed off.
Apparently, there's some real dissention taking place within the ranks of the commie party over the failure to pass the "mining bill".  Damned right there should be.  The whole episode had me so pissed I had to take a break.  Belling was saying the people in Jauch's district were fucking PISSED.

3 It was bad, 3000 laid off.  They neglected to say how it was the union who forced the lay offs by refusing to make 1% contribution to pension.

There is also some problems occurring because the teachers union forgot to take a vote before declaring that they were supporting good old Kathleen.

4 www.fallfashions.co.uk Really we can get a great deal if we search carefully and use our old clothes.Thanks for this very informative blog of yours

5 Great article, totally what I was looking for.

6 I've met a few people in my time who were enthusiastic about hard work. And it was just my luck that all of them happened to be men I was working for at the time. ~Bill Gold
http://rajasthanispecial.com/index.php/womens-collection/salwar-kameez.html

7 Wow, this is pretty interesting. Inspiring, as well. Thanks for sharing such inspiring experience with us. Great blog, congrats.!

Verify the Recall Update, Housecleaning, and other Somesuch. From the inbox this morning...

It's official! Verify The Recall will launch our publicly accessible, online, searchable database for recall petition signatures during the evening of Wednesday, March 7, 2012!

This program is made possible because of the incredible data entry efforts made by VTR Volunteers in recent weeks. THANK YOU for all of your hard work!
Wonderful news.

There is an incomplete list circulating (with a search tool) which can be found at Put Wisconsin First, but the Verify The Recall searchable database will go live on Wednesday night.  I presume the VTR database will most likely be found through the VTR website

I'm absolutely delighted that the data entry is complete for the Walker challenge.   I believe there was a substantial drop off in enthusiasm as the days (then weeks) dragged on.  I began to worry we'd not complete.
__________________________________
In other news, I attended the "It's Working Wisconsin Town Hall" event sponsored by Americans For Prosperity and the MacIver Institute.  Speakers included Luke Hilgeman (State Director of the AFP Foundation), Brian Fraley from the MacIver Institute, Rep Robin Vos (WI Joint Finance Co-Chair), Rep Jim Steineke, and Ben Schneider (Oshkosh School Board).

One of the highlights was the new video effort by AFP and MacIver to showcase the results of Act 10.  Check out their website HERE. 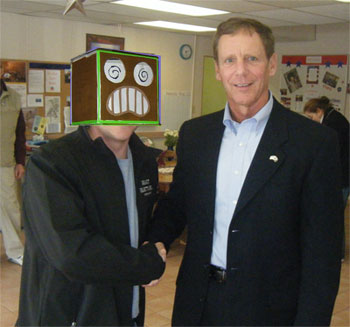 It was great, and afterward one of the Oshkosh TEA Party activists let me know US Senate Candidate Mark Neumann would be dropping through the Republican HQ in Oshkosh.  Neumann is a proven budget slasher, and is endorsed by Senators Rand Paul and Jim DeMint (two conservative rock-stars if ever there were).  I've concluded that this is his time, and he is the man.  Mark Neumann is the best choice to represent Wisconsin in our war against the bastard commie horde.  Neumann for Senate 2012!

In terms of Neumann, well in a choice between and Tommy I would choose Mark but not without some hesitation.  Sorry he has some past that shows he can be a bit of Rino at times BUT Tommy likes to spend and frankly choices you make in your private life do reflect the type of man you are.

2 I agree with your assessment, Lizard.  I had issues with Neumann due to the actions of he and his supporters in the Gubernatorial primary versus Scott Walker, but in this race Neumann is the man.  He claims he's an arch fi-con in office, and I believe his record in the house bears that out.

Tommy Thompson loved him some Obamacare, and sure was cozy with Sebelius and Daschle.  (I'd get all involved in documenting his transgressions, but I don't wish to get buried in the weeds right now).

And besides, the guy will likely only serve a single term (he is, after all, like, old, and stuff) and we'll have to re-fight for this seat once again in six years.

3 Neumann has a number of things in his voting record that make him a bit of a rino but better than Tommy.

I may not agree with Kohl's politics but at least he has not embarrassed WI the way Feingold did :-)

4 True that.  I've heard some Hovne (or whatever) commercials on the radio... but I believe the "carpetbagger" rap might be tough for him to beat.  He has put on some great radio ads, though.

At thip point, I'm Neumann.  Guess maybe I'll hold my fire to see how things shake out for a little while.

From now on, We are ALL Andrew Breitbart. Please allow me to present this without further comment.

"Who is Andrew Breitbart?"

Update:  "Every time I see a tree, I just want to kick its ass.”

1 Hey Botnet, I need the website link you gave me the other day on H&B.  I thought I saved it but cannot find and have another friend who wants to find out about the properties he owns. 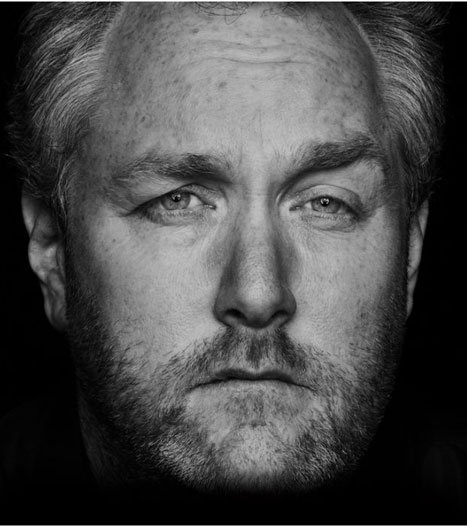 Rest in Peace, Proud Warrior.  My prayers for you and your family.

May millions carry the sword you joyfully wielded.  We are still at war, brother, and we'll carry the fight... but you'll be sorely missed.